Posted on October 17, 2013 Categories: Conservation Updates, What's New Comments are off for this post 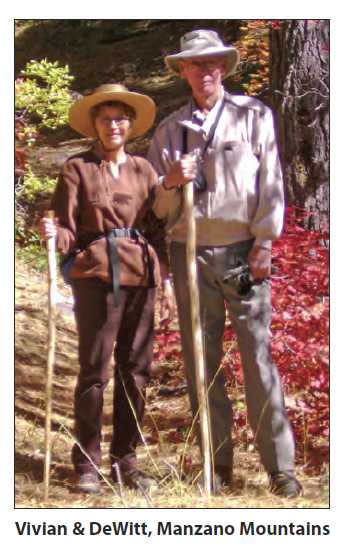 Of those who cherish the plants native to the Land of Enchantment, there are few unaffected by the small and simple word IVEY. Thousands have paged through his Flowering Plants of New Mexico while puzzling over a plant in the field. For all of us, his passing on June 23 was a sobering tragedy. As I write this, I place him among the greatest souls I have known, the consummate gentleman, the softest purveyor of knowledge, always unwilling to be special.

Robert DeWitt Ivey was born on October 8, 1923, in Tampa, Florida, but the Iveys actually lived in Plant City, about 15 miles east of Tampa. When he was five, his father accepted a job as a newspaper editor in Jacksonville, and the family relocated. There, young Ivey attended public schools, but the process of education was always under his own management. Early on he became fascinated with reptiles, animals, and birds. By the time he graduated from Robert E. Lee High School, he also knew that he had a quiet passion for drawing and art. The future was inescapable.

In 1941 he enrolled at Florida Southern College (now Florida Southern University) in Lakeland, Florida, just five miles east of Plant City. That December the United States entered World War II. DeWitt was ineligible for service because of his height (6’8″). In the fall of 1943, he transferred to the University of Florida at Gainesville, planning to major in English. Later in his junior year, after a chance meeting with a mammalogist, he decided to take extra courses in order to graduate with a double major, English and biology. In the spring of 1945 he graduated magna cum laude. He was valedictorian of his class and became a member of Phi Beta Kappa. He stayed on at Florida and in the spring of 1947 received a Master of Science degree in mammalogy.

That summer he decided to seek employment. After sending out a number of applications, he received a job offer from the University of New Mexico and was intrigued by the prospect. For two academic years he served as an instructor in the biology department there, but felt a need to pursue a PhD. He spent a year in graduate school at the University of Michigan but chose not to continue his studies. After a year at the College of Charleston in South Carolina, he became homesick for New Mexico and by the fall of 1951 was teaching biology at Albuquerque High School. In 1959 he transferred to Sandia High, also in Albuquerque, where he taught biology for the next 31 years.

He loved to take his students on field trips to study and trap mammals, but concerns about potential health problems became a limitation and he began concentrating on plants. He began making study units for his students with his own illustrations. In 1982 he married Vivian Porter. In 1983 they put together the first edition of Flowering Plants of New Mexico. Over the years they traveled all over the state collecting and studying plants. Four more editions of the book appeared, culminating in the fifth in 2008. Flowering Plants of New Mexico is by far the most consulted plant reference in the state. Countless fresh and tattered copies rest in the hands of plant enthusiasts all over New Mexico.

He officially retired from the classroom in 1990. He donated his extensive mammal collection to UNM. His bird collections went to Adams State College in Alamosa, Colorado. Recognition of his achievements and contributions began even before his retirement. In 1963, he was designated Science Teacher of the Year for New Mexico by the National Science Teachers Association. The following year, the NSTA selected him as Science Teacher of the Year for Region 7 (a five-state area containing NM). In 1993 the New Mexico Chapter of The Nature Conservancy awarded him with their Aldo Leopold Conservation Award. In 1995 he was given the Sigma Xi award for his dedication to the teaching of science. In Santa Fe in 2003, New Mexico Governor Bill Richardson formally recognized his decades of contributions to science and teaching in the state. NPSNM presented him with a lifetime membership in honor of his efforts.

Robert DeWitt Ivey always chose to adore the process of living and to grasp each moment fully. Tales abound. He built a catamaran to sail the lakes of New Mexico. He dabbled in taxidermy. He taught ballroom dancing. He developed his own style of mammal trap. He spent the decades since his “retirement” working to make the vast natural universe real and accessible for those around him. He gave countless talks all around the state and was always willing to help others with identification of their plants. In 2012, in conjunction with Dr. Kelly Allred of New Mexico State University, he published Flora Neomexicana III: An Illustrated Identification Manual, a book that allows botanists to determine the genus and species of any vascular plant known in New Mexico.

His mark on the natural history of this state is indelible.

Riparian Restoration for Native Plants on the Rio Grande

Desert Blooms and Marathon Moths – Plants are Cool, Too!