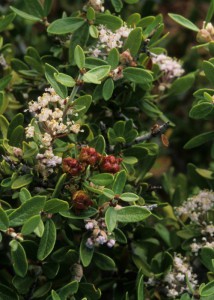 Five floristic regions with different climates and geologic histories contribute to the rich native flora of New Mexico. These are the Northern Chihuahuan Desert, Mogollon/Southern Rocky Mountains, Great Plains, Colorado  Plateau, and Apachean regions. The resident plant species that evolved within, or naturally dispersed to, these regions are "native" or "indigenous" species. Other plant species that have been introduced into these regions since Europeans began bringing plants to North America are "alien" or "exotic" species.

Botanists are able to distinguish native from alien plant species with the records of early botanical explorers and by inferences made from geographic distribution, relatedness to other species, and the types of habitats where they occur. Plants with small restricted ranges are obviously native, but several alpine and wetland plants, mosses, and ferns have circumboreal or even cosmopolitan distributions and are native to different continents.

Misinterpretations of native or alien plant characteristics remain common. The most frequent mistake is to identify naturalized alien plants as native species because they are common and reproducing within natural habitats. For instance, sweet clovers (Melilotus sp.) and many pasture grasses (Bromus inermis, Agrostis gigantea, etc.) are purposely introduced alien species that are often perceived as native. On the other hand, some native plants that are aggressive or occur on disturbed soils can occasionally be interpreted as not belonging to the natural flora. Most people think all of our thistles (Cirsium sp.) are aliens. The truth is, there are three times more species of native thistles in New Mexico than there are alien thistles.

Now that the New Mexico flora is relatively well known, it is easy to make a "native or alien" determination by comparing a plant in question to the list of Alien Plants Known in New Mexico. If a plant occurs in the New Mexico flora and is not on the list of alien species, then it is probably native. This applies with some assurance to plants found growing naturally, with the precaution that new alien species are regularly offered by nurseries, may be found in human landscapes and may not yet appear in the list of known alien plants.

Why Is It Important?

All of our native plants evolved here and been subjected to long periods of natural selection. They are perfectly adapted to the climate and habitats of New Mexico. Native plants are in balance with the ecosystem, provide cover and food for native animals, and have developed a surprisingly diverse array of relationships with soil fungi and other native microorganisms. What better plants to grow on any patch of ground than the species that have evolved upon that spot?

Alien species are out of place in the natural habitats of New Mexico. The specific soil and climatic characteristics that allow them to thrive and reproduce may not be here. Likewise, the insect herbivores, diseases, and climatic conditions that kept them in check in their native lands are also unlikely to be here. Most will persist on disturbed soils for a brief period and then die away. Some others are released from their natural constraints and proliferate to such an extreme degree they damage agricultural operations and entire ecosystems. These naturalized alien species deprive native plants, microorganisms and animals of their habitats and ultimately diminish the biodiversity of New Mexico. Most of New Mexico's most damaging alien weeds were purposely brought to North America as garden, forage or erosion control plants.

Below we provide some information to assist interested individuals in learning about our native flora and the floristic zones and vegetation types that contribute to our state's biodiversity. We include some species checklists as they become available, and provide links to botanical photographs.

New Mexico has one of the most diverse landscapes in the United States. The topographic and geologic diversity interact with the climatic features of temperature, wind, and precipitation to determine the plant diversity in New Mexico. In terms of size, New Mexico is the fifth largest state in the union while it is has the fourth highest plant diversity in terms of numbers of species.

Plant diversity in a particular region is often described in terms of vegetation diversity. Vegetation has two components: structure and floristic composition. Vegetation structure refers to the physiognomy such as forest, grassland, or shrubland. The floristic composition is the actual taxonomic diversity of the different structural types. For example, all continents except Antarctica have forests but the families, genera, and species in them are very different among the different geographic locations.

Description of plant diversity relies on the use of physiognomic and floristic classification systems. There are five floristic zones (see below) and within these zones there may be some or all of the six major structural or physiognomic vegetation types as defined by Dick-Peddie (1993). These major structural types are: Tundra, Forest, Woodland, Grassland, Scrubland, and Riparian.

Vegetation types are based on growth form and abiotic features of climate (primarily precipitation and temperature), geography (elevation and latitude), and geology (soils, slope, and aspect). In New Mexico the greatest influence on vegetation is precipitation (Dick-Peddie, 1993). The next most important influence is temperature and together with precipitation comprise the primary determinants of vegetation patterning. Other components of climate, geography, and geology such as wind, soil type, slope, aspect, elevation, latitude etc. are considered secondary determinants of vegetation patterns.

Banner photo of the Milky Way by Lisa Mandelkern