Posted on July 24, 2014 Categories: Events Comments are off for this post

With a grant from PNM Resources Foundation, essential support from the city of Albuquerque, and the 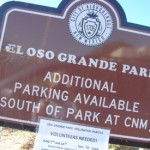 enthusiastic partnership of a neighborhood association, the Native Plant Society of New Mexico’s Albuquerque Chapter is restoring an area of degraded open space to create the Oso Grande Pollinator Habitat!

A portion of El Oso Grande Park remains an undeveloped remnant of high desert in what has become suburban Albuquerque. Along with some natural charm, it contains an area that was scarred by a human-caused fire a few years ago, then crisscrossed and trampled by boots and paws, and inhabited by a few lonely prickly pears.

Virginia Burris, former chapter president and long-time advocate for habitat gardening, and Alicia Quinones, a more recent member of NPSNM, had a brainstorm: turn this neglected spot into a habitat that supports pollinating insects while furthering the goals of the Native Plant Society of New Mexico.

Of course, such an environment will also promote a diversity of birds; it will educate and fascinate earthbound, two-legged visitors; and it will aesthetically improve the park as it serves the native plants over a wider area than just this 1.4 acres. Remember, not only do pollinators depend on flowering plants — the plants need pollinators just as much! 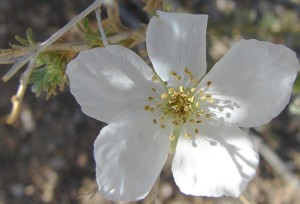 Apache plume (Fallugia paradoxa), purple thistles (Cirsium ochrocentrum), chocolate flower (Berlanadiera lyrata), desert willow (Chilopsis linearis), tansy aster (Machaeranthera tanacetifolia) and other beautiful flowering natives have been clinging to the outskirts of the salvaged area all along. You can almost sense their eagerness to recolonize their former home now that it’s more protected.

The $10,000 grant to kick off the project was awarded by the PNM Resources Foundation, which has supported community efforts of New Mexico non-profit groups for over 30 years. The City of Albuquerque, delighted with the cooperation of interested residents, has supplied us with invaluable perimeter fencing and a reclaimed water system to help get new plantings off the ground. 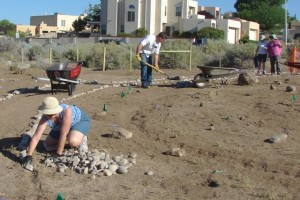 This would not have been possible if not for the contributions of Judith Phillips, landscape designer, Carol Dumont, City Planner, Plants of the Southwest, other local contractors and suppliers, and the tireless efforts of Oso Grande Neighborhood Association volunteers.

We are grateful for the Native Plant Society of New Mexico state board for permission to use the Society’s non-profit status in acquiring the grant from PNM Resources Foundation. And we hope that the Habitat, while remaining a City property, will increasingly grow in value as an educational and scientific asset to the Society.